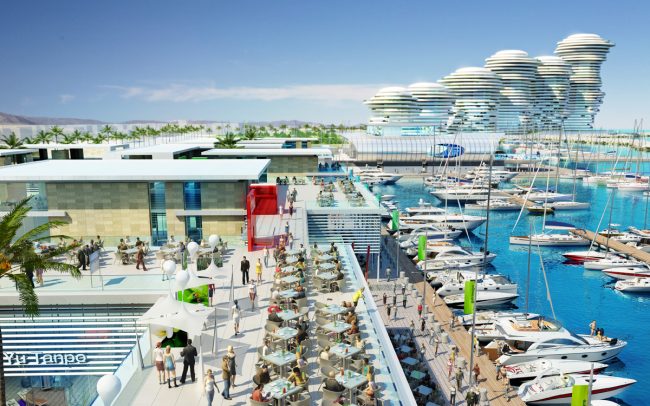 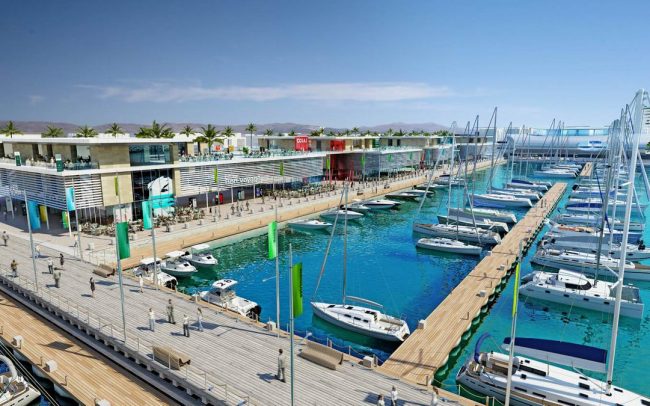 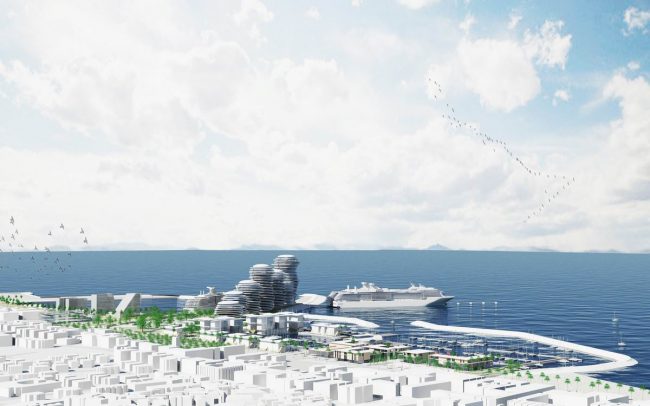 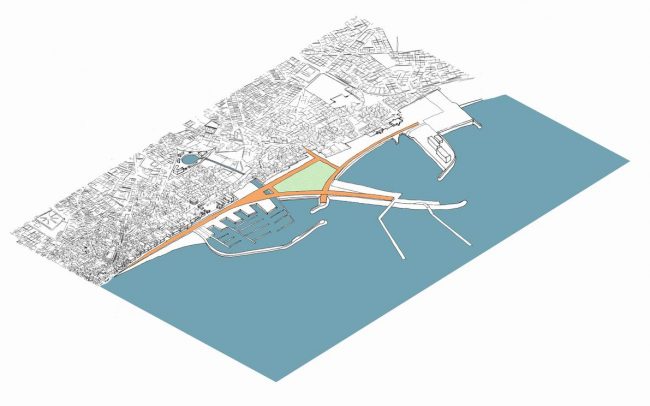 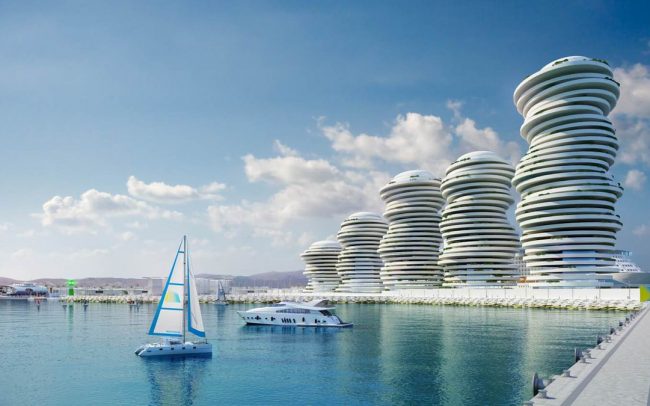 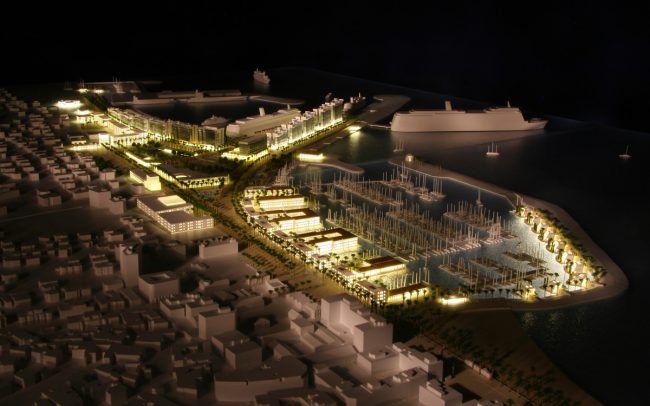 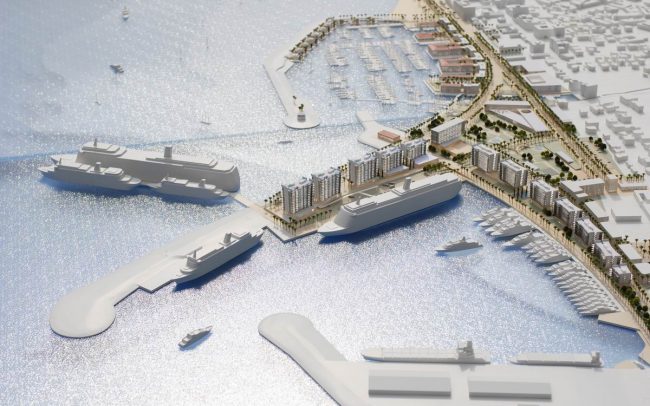 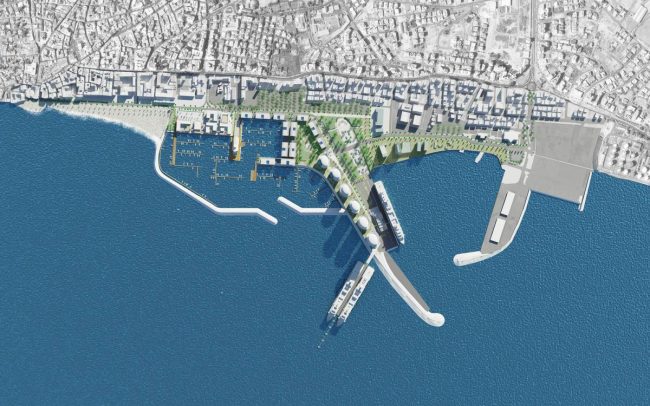 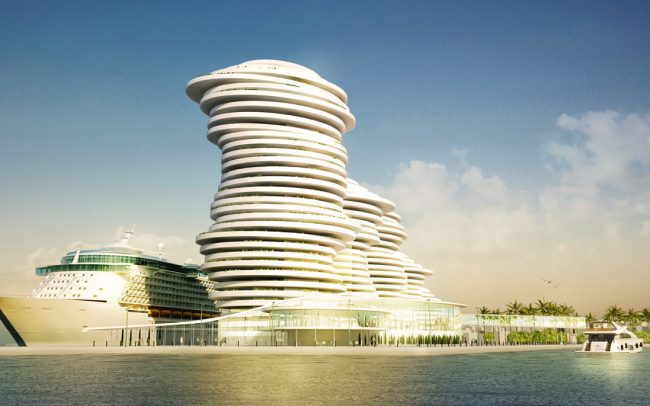 The redevelopment of this 28 hectare site at Larnaka Port and Marina in Cyprus, aims to reinvigorate and transform it into a major cruise and marine destination at the heart of the Eastern Mediterranean, with a mixed use public waterfront environment rivalling the best the world has to offer. The scheme expands the dilapidated marina to a 950 berth state-of-the-art facility and converts the existing commercial port to combine commercial, mega-yacht and cruise facility uses. The new cruise berths are located on an off-shore jetty; a strategy unseen outside the Caribbean. The project is a 35 year Design Build Finance & Operate concession for the Government of the Republic of Cyprus, with Bouygues Batiments International and the Port of Amsterdam part of the consortium.

The over-arching architectural concept for this complex project is for the buildings to share a ‘weightless dynamic’, using mass and folding surfaces to create a rich, organic, harmonious new architecture for Larnaka. Our proposal creates an axis from the old castle along the beachfront, to a new concert hall and extensive waterfront park.

The development provides a complementary extension to the city centre, within a waterfront setting, and comprises 250,000m2 of diverse mixed use components including a new marina quarter, with a multi-purpose grand piazza for events, exhibitions and outside concerts, a striking new Yacht Club, designed as a ‘floating’ open-ended tube of accommodation which links the land to the marina, a new Cruise Terminal Building, which will form a gateway to and from the island, Marina Basin and Marina Park waterside residencees and The Port Promontory’s tall, organic ‘floating’ towers which will form a new, instantly identifiable, backdrop and gateway to the city. Buildings will be cooled via passive and geo-thermal sea water systems.

The site is a dilapidated old marina and port, next to the busy ‘palm tree beachfront’ – Finikoudes. The bid for this project took 6 months of very intense work from 2006 until the win in 2007. The design was very much a product of extremely close collaboration between the bidding contractors, the marine designers and cruise and marina experts, with ourselves coordinating all work to coalesce together around an urban and architectural design ‘chassis’. Sketch isometrics proved to be a very effective method of communication in the early stages of the design.

The project began with the marine designers concepts of cutting into land to expand the marina and installing an offshore jetty for the new cruise terminal (giving easier berthing for visiting cruises and negating an extremeley expensive expansion of the port proper.) The chassis for the urban design was to extend the beachfront axis into the site, as one of four ribbon boulevards, intertwined to create a new large urban park at their centre, forming the urban chassis and links to the city on all sides.

The masterplan is organised into defined urban zoning, being marina cultural and commercial quarter, low and mid rise marina side residential areas, the high rise residential and hotel port promontory and the mixed use port basin mixed use area, facing the mega yacht quay.

The scheme is focussed toward being a soft/low density masterplan arranged around a number of urban open spaces of different character and focus, with a multitude of marine vistas, building to a corresponding scale next to the existing city and building high away from the city, creating striking tower forms to ‘mark’ a ‘Gateway to Cyprus’.